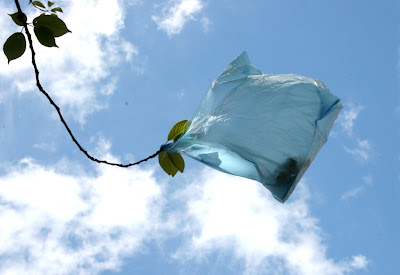 For an archeologist, Hilary Jack's "Turquoise Bag in a Tree" showing on The Bigger Picture as commissioned by Cornehouse, , is unsettling. Jack photographs and films empty turquoise plastic carrier bags in urban situations. They have been blown into the branches of trees. People email digital photos of similar bags in similar trees to her through her website. These collections are juxtaposed with her own situated sculptural interventions: placing carefully-made or oversized bags in unusual public places, or showing an oversized video of a plastic bag in the wind in Exchange Square. The result is a compelling project that documents things that survive from the most recent past, and works with their presence in what archaeologists Victor Buchli and Gavin Lucas have termed ‘contemporary past’ (Buchli and Lucas 2001). The work deals with quotidian waste that persists: by capturing moments and working on material objects it engages with archaeological matters, challenging the boundaries of our practices (Shanks 2005, Bradley et al 2004). It deals with Garbage, Consumerism and unexpected Enchantments.


Garbage
Notions of garbage, trash, junk are at the heart of this work: the excess of forgotten, discarded objects generated through the material practices of everyday life. These thin, translucent, empty bags appear to have outlived their usefulness, have been discarded as waste products. They are usually invisible or passed over, but Jack’s work documents their continued presence, their afterlives. We are surprised that they’re still here. They have not been pressed into landfills but, thrown away, have escaped on the breeze, filled and lifted up like kites, slipping from the fingers and spiraling above our heads. Superfluous, tattered and windblown, they cling to the branches of municipal trees like awkward, rustling windsocks. By engaging with garbage, the work acknowledges context – documenting through film where these scraps of carrier bag survive. Jack’s practice serves to document the shifting situations of these plain bags, and of the artist’s material engagements (cf Doherty 2004). Jack re-uses and recycles these hopeful scraps of plastic. She deals like Bill Rathje’s ‘Garbage Project’ at the Staten Island landfill, , with the ‘garbology’ of the modern world (Rathje and Murphy 1992). Here, artistic practice intersects with contemporary archaeology - scavenging, and creatively working with rubbish in its present contexts.

Consumerism
Meanwhile, there is a quiet activism to the project’s engagement with consumption and environmental concerns. Plastic carrier bags are commonplace, everyday items. Their textures, sounds, stretchability, how they pull heavily at our arms as we walk home, are all familiar. Yet here, they are presented as the messy remains of consumerism – empty containers for carrying things from one place to another, discarded en route. Jack reminds us that they will resist transformation and decay for hundreds of years. She raises the environmentalist critique of an unsustainable consumer culture by examining what survives from thousands of momentary purchases, ephemeral moments. This challenges the boundaries of what we define as refuse: the attitudes that Ellen Lupton and Abbott Miller, in their studies of changing domestic interiors, called ‘the aesthetics of waste’ (1992). The artist’s critical interventions have a delicate politics to them: one that critiques throwaway material culture, while at the same time recognizing its strange, affective powers.

Enchantments
We might imagine that modern, industrial processes of commodification have drained from the world of objects any sense of enchantment – leaving only homogenizing and deluding ‘culture industries’. Material culture studies increasingly challenge such perspectives through the notion of object agency. Ethnographers have explored the nature and limits of the power of objects (especially art objects) in social life (Gell 1998). Prehistorians working on ‘rubbish pits’ have recognized the aesthetics of many depositional practices in the past (Pollard 2001). In contemporary archaeology, and in Jack’s contemporary art, the ‘enchanting’ nature of objects is present not just in distant ethnographic or prehistoric situations, but all around us in the detritus of the contemporary world. Jack documents taphonomic accidents rather than purposeful assemblages – the stuff that remains. Her knotted rope of turquoise bags hanging from a sixth-floor balcony evokes contemporary fairy tales. In its archaeological encounters, Jack’s work invites us to extend complex intentionalities to nonhuman objects (not just to humans). The bags arrange themselves in trees. They dance in the wind. They withstand degradation. They resist fragmentation. This is what Jane Bennett (2001: 14) has called ‘enchanted materialism’: the refuse is animated, enchanting, ineffable. Unsettling and compelling for an archaeologist: a timely reminder of the common ground that is shared between contemporary art and contemporary archaeology: the contemporary past.